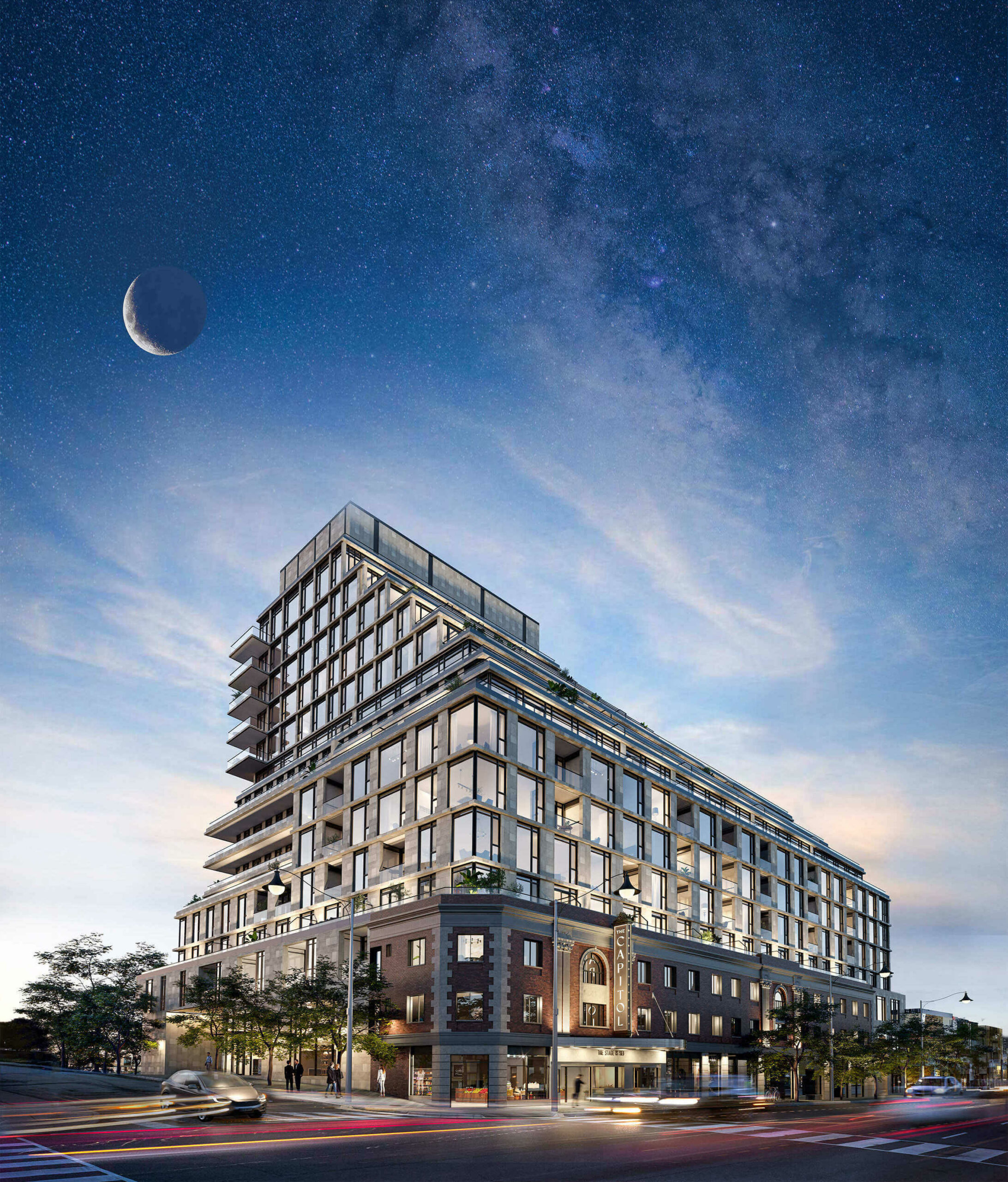 When the Capitol Theatre at Yonge and Castlefield opened in 1918, pork-pie-hatted visitors and their flapper dates packed the place to watch Mary Pickford films and vaudeville acts. As time shot forward, silent pictures at the Capitol gave way to talkies, several decades of them, but by 1998 the Art Deco pile was primarily hosting weddings and other private functions.

Together with Westdale Properties, the developer is stage-managing the landmark’s next act, its transformation into The Capitol Residences.

“The building set its sights on us,” says Zagdanski, recalling how he was approached by the McClelland family that built, owned and operated the theatre.

“We do a lot of work in this area and they recognized it’s time for the building’s next iteration,” says Zagdanski. “We were honoured they came to us — it’s a really special boutique project for Midtown. One we’re extremely honoured to shepherd into its next life.”

Yonge and Eglinton has it all, notes Zagdanski. “It’s an incredible location in the heart of the Yonge north village, where you have shops and restaurants. It’s close to transportation and amenities.”

The Madison Group, a five-decade-old developer, is behind several nearby high- and low-rise office and retail spaces, rental and retirement properties, as well as the ART program, the illuminated walkway designed by muralist David Guinn and lighting designer Drew Billiau.

Hariri Pontarini Architects and Turner Fleischer Architects, along with heritage architect Christopher Borgal, will retain the Capitol’s façade, previously designed by John MacNee Jeffrey, as well as the vestibule. The plans include a marquee and an elaborate porte cochère.

Tiered levels on the building’s east side will allow residents to bring the landscape several stories up, onto their large terraces, while those living on the west side of the property will enjoy the new 3,700-square-metre parking-lot-turned-park, says Zagdanaski.

“This is not ordinary; it’s the antithesis of a traditional project in midtown Toronto,” he says.

The lobby is being designed by Alessandro Munge of Studio Munge, bringing drama to the building’s public and private spaces: the fun custom fixtures, plush furnishings and arched doorways in the lobby; the moody-toned speakeasy-inspired golf simulator and social club with mile-long drapery and jade hues, and even an imaginative kids’ play area.

Other amenities include a state-of-the-art fitness facility, a pet spa, automated parcel storage, 24/7 concierge service and an outdoor lounge and dining areas with a garden and grill stations.

As for the suites themselves, “what makes them special is they are larger — they are designed for living,” says Zagdanski. “They’re all 10-foot ceilings, which is unique to any condo project.”

There aren’t too many repetitive layouts either, he says. “Every one is individually designed, so they’re similar to the homes in the area. There are even gas ranges.”

Such features are “meaningful to the people in this demographic who are transitioning out of homes that had all of those things.”

Zagdanski describes a move into the Capitol Residences as “upliving,” not downsizing.

Residents, he says, will “have bigger suites, great amenities, you’re still in the village and you’re backing onto a park.”

If they could only find a movie house to catch a film in.