Madison Group and Westdale Properties‘  The Capitol Residences has acquired approval from the City for a park to be built to the west of the development. The upcoming 14-storey, Turner Fleischer Architects and Hariri Pontarini Architects-designed condo located at Yonge and Castlefield streets in Midtown Toronto is also planning for green spaces to be embedded in the fabric of the building, through its cascading outdoor terraces.

“We are excited to announce that Toronto City Council has officially adopted the re-designation of the adjacent land to Parks and Open Space, providing The Capitol Residents with a new park,” said Josh Zagdanski, Vice-President, High-Rise of Madison Group. 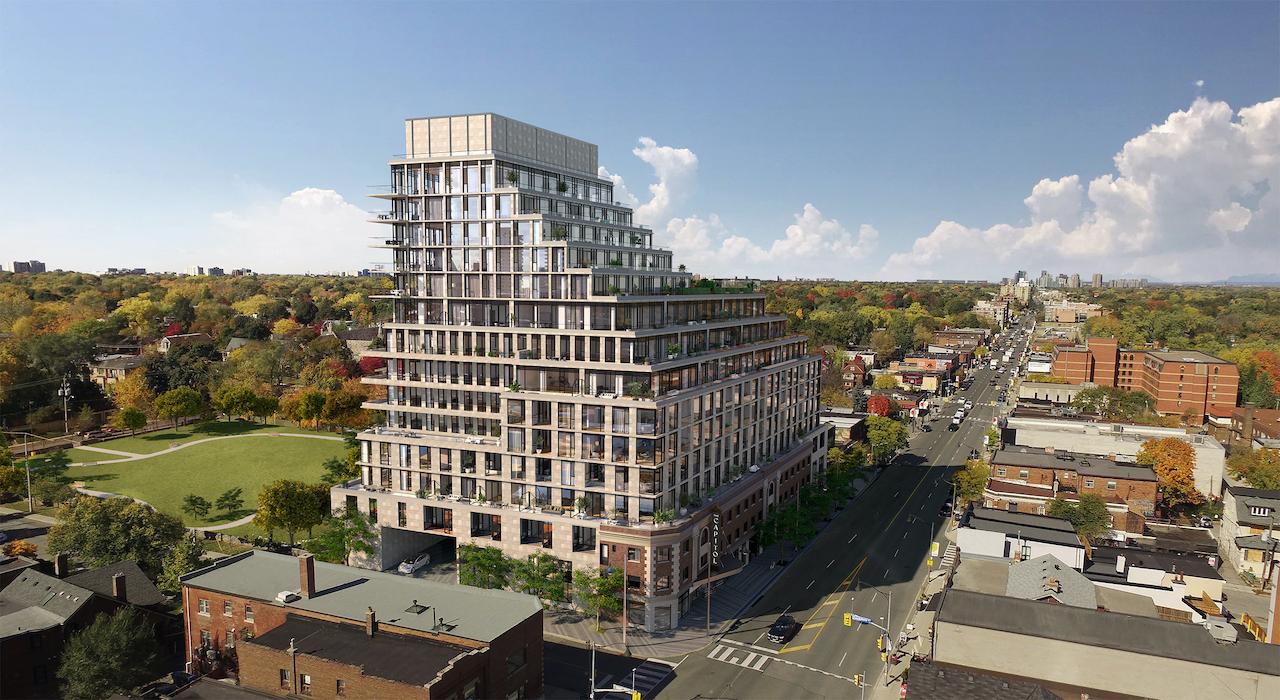 The Capitol Residences with newly approved park to its west, image courtesy of Madison Grouphttps://urbantoronto.ca/release/ad-leaderboard-container.php

The park will replace what is currently a parking lot, and offer a total of 3,700m² of green space for both the residents of the building, and those of the surrounding community. When the building is complete, all units located on the west side of The Capitol will have views of the brand new park from both inside and from their generous private outdoor spaces. Lower terraces will enjoy natural light filtered through the adjacent tree canopy, while expansive neighbourhood views will grow as suites climb upwards. On the tenth floor, all residents will be able to enjoy a terrace with private seating areas and a communal greenhouse. For the units which do not face the park, they will enjoy oversized balconies or terraces overlooking the vibrancy of Yonge Street. 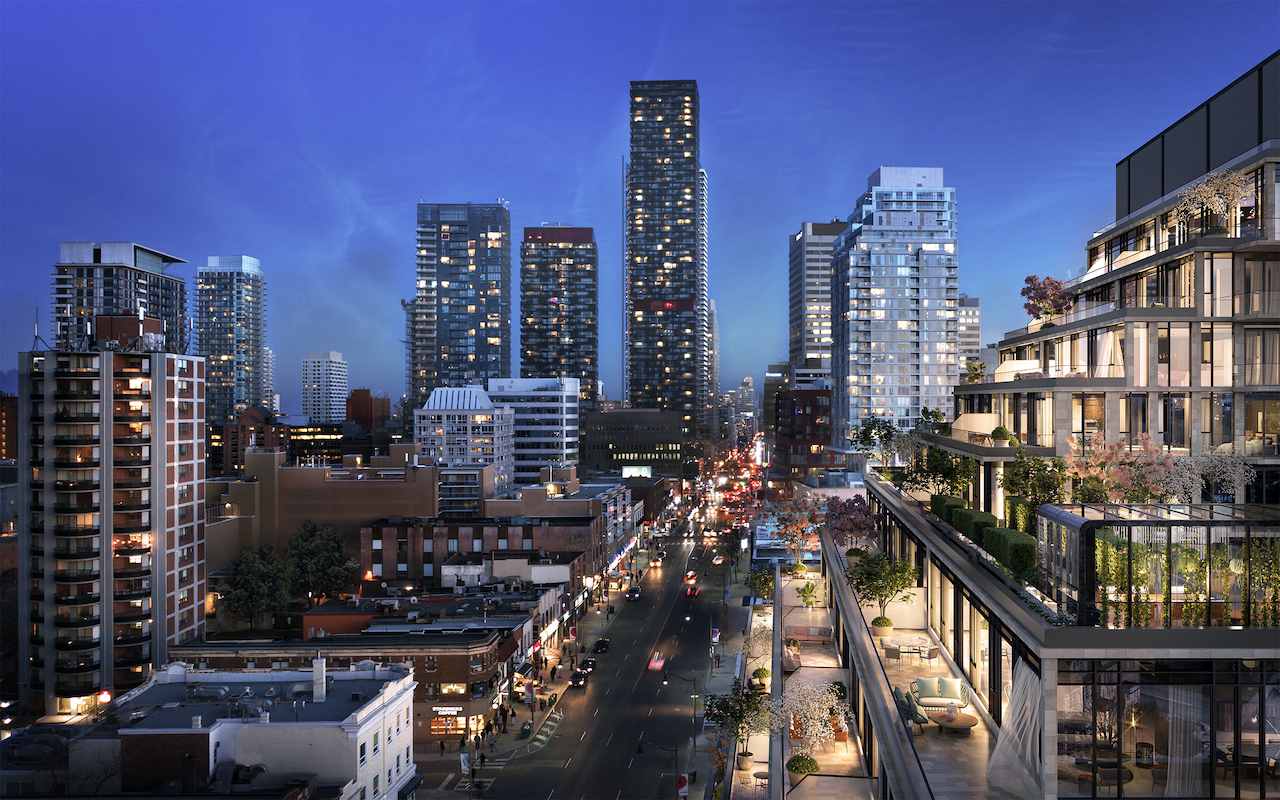 View over Yonge Street from The Capitol Residences, image courtesy of Madison Group

The Capitol is also in close proximity to additional parks in the area including Eglinton Park, Alexander Muir Gardens, Sherwood Park, and the Blythwood Ravine, meaning that residents will have their choice of green spaces when they wish to enjoy the outdoors.

You can learn more from our Database file for the project, linked below. If you’d like, you can join in on the conversation in the associated Project Forum thread, or leave a comment in the space provided on this page.

Originally Published By: The Toronto Star

A new landmark came to Midtown Toronto in 1914 when the 1,300-seat York Theatre was built on Yonge St. at the corner of Castlefield Ave.

The theatre hosted vaudeville shows and silent films until 1922 when a three-storey building, new entrance and balcony were constructed and it was adapted to exclusively screen movies. Its transformation represented the work of architect Murray Brown, who designed Famous Players Theatres across Canada, and it was renamed the Capitol Theatre.

Now, a century later, the historic Capitol Theatre’s rich history will be integrated into another transformation as the site of the Capitol Residences, a mixed-use residential condominium project by the Madison Group. The design will retain the original, 20th-century classical revival façade and the theatre’s art deco stainless steel marquee, restore the entrance and the interior vestibule, and rebuild the theatre space.

Indi Miskolczi, who now lives in Peterborough, vividly remembers the excitement at the old theatre on June 12, 1981. Then a student at the Ontario College of Art, Miskolczi took transit to Midtown, stood in line under the Capitol’s marquee, followed the queue through the ornate lobby and took her seat in the sold-out theatre. That’s when she met another “Indy” for the first time — Harrison Ford’s character Indiana Jones.

“I remember the high ceilings and big chandeliers,” she says as she took in the theatre’s details until the lights dimmed. “And that night, ‘Raiders of the Lost Ark’ became one of my all-time favourite movies.”

Thousands of other Torontonians have similar fond memories of the Capitol that, in the beginning, kept things friendly with the Laura Secord shop next door by not offering a confection and candy bar. In 1998, after being saved from demolition and after a $2-million renovation, the Capitol became an upscale event venue until finally closing shortly afterward.

“This site is in an incredible location with the best of town and country,” said Josh Zagdanski, vice-president of highrise at Madison Group. “It’s in the middle of Yonge North Village, which has all these wonderful shops and restaurants. It’s close to all the action of Yonge St. but far enough away to feel part of the neighbourhood. It’s a perfect balance and that’s why it’s unique.”

The property didn’t have a heritage designation when Madison purchased it. However, as the development team moved through the approvals process, they agreed with the city that it should have a conservation plan.

“Over time and throughout the later decades of the 20th century leading to this day, the building has grown to become an important complex that maintained and supported the commercial character of the street,” said Emad Ghattas, senior associate architect at GBCA Architects, the firm handling the heritage aspects of the project. Hariri Pontarini Architects and Turner Fleischer Architects have designed the new tiered building in a style that ties in with the heritage sand-cast brick and light stone.

The Capitol’s canopy and storefronts that adorn the entrance are significant features and plans include restoring the streetscape appearance to its 1937 style. The current canopy is an alteration, said Ghattas, and was stripped of some of its design features. “We are proposing to bring some of that excitement to the streetscape and are working with a lighting consultant on this portion, as lighting is an important component on this project.”

Zagdanski said initiatives for the heritage façade include retail outlets and the theatre itself will still be accessible to the public in some form, such as a restaurant or as a theatre. A new park, designed and built by the city and with a financial contribution from the developers, will cover nearly an acre and replace the old parking lot at the rear of the building.

“What’s great about (the theatre), is that it had its up and downs over the years, but it’s always been a place of community and gathering,” said Zagdanski.

“Our team felt a great obligation that the new project reimagines it as a place for community, a place for gathering. It’s been a real treat for us.”

The condominium tower will rise behind the façade, with a series of ascending landscaped terraces and oversized balconies. Zagdanski said the residential structure will have larger units with 10-foot ceilings and dens that can be closed off for working from home. There will be 145 units in all, with one-, two- and three-bedroom plans.

“Our expectation is we’ll get buyers from the surrounding communities and neighbourhood. This is up-living not downsizing,” said Zagdanski. “These people want to transition from their current homes to a more urban lifestyle, but also to a luxury lifestyle, and don’t want to lose anything in the transition.”

Madison Group consulted with local residents, the BIA and city councillor, and Zagdanski said the feedback helped inform the design and layouts. He added the Capitol Residences redevelopment reflects the municipal government’s objectives for that of stretch of North Yonge Village: “The city is not looking for towers here. A more intimate building is the intent and we helped pioneer that. It looks and feels right for the area, is close to neighbourhood shops and restaurants, very close to transit and will have all the amenities.” The building has a Walk Score of 90 and a Transit Score of 87.

Alessandro Munge, principal in Studio Munge that specializes in luxury hotel, restaurant and residential design, took inspiration from the theatre’s history for the Capitol Residences for the interior spaces, said Zagdanski. “The design is very organic and had its story in the Capitol Theatre. Alessandro took it, ran with it and made it exceptional.” The theatre influence will be evident in the porte cochere and the grand entrance that is a throwback to the heyday of movie theatres with oxblood marble floors and walnut panelling. As well, the kids’ room will have a theatre stage.

“Honestly, we’re very excited about this project,” said Zagdanski.THTracy Hanes is a GTA-based writer and a freelance contributor for the Star. Reach her via email: tracyhanes@yahoo.ca